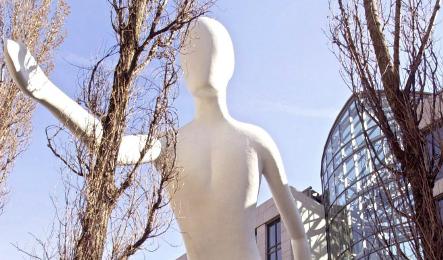 A statue in front of the company's offices in Munich. Photo: DPA

“Notwithstanding the most severe financial crisis for generations, Munich Re recorded a clear profit for the financial year 2008,” a statement said.

In November, Munich Re was forced to abandon its initial 2008 profit target of more than €2 billion, and the result announced on Wednesday was less than an average forecast of €1.63 billion compiled by Dow Jones Newswire.

Shares in the re-insurance giant dropped by 2.56 percent to €104.73 in opening Frankfurt trade, while the DAX index of leading shares was 0.23 percent higher overall.

Gross premiums, a Munich Re yardstick, rose last year by 1.5 percent to €37.8 billion, and the company said it would propose an unchanged dividend of €5.50 per share.

Munich Re said it had significantly reduced its equity exposure in the fourth quarter, though it was also forced to reevaluate its stock portfolios, which had a negative impact on income.

It put the full-year cost at around €200 million, although the sale of holdings helped compensate in part, adding €700 million to the fourth quarter results.

“Naturally, as an investor of about €175 billion, we too had to absorb large losses on our risk-oriented investments,” chief financial officer Jörg Schneider said in a statement.

But the group’s asset manager system managed nonetheless “to steer our portfolio successfully through the crisis,” he added. “We have reduced our equity exposure further and have invested strongly in secure government bonds, but have increasingly also taken selective advantage of good return opportunities especially from corporate bonds.”

Board member Torsten Jeworrek said that the market for re-insurance would strengthen this year, citing as an example the offshore energy sector, where prices have improved following hurricane-related losses last year.

“Re-insurance is currently one of the few remaining possibilities for primary insurers to swiftly obtain the capital they need,” Jeworrek noted.

On Tuesday, German rival Hannover Re said it had also managed to raise its prices when contracts came up for renewal.

The group’s president Wilhelm Zeller declared: “For us, the financial market crisis is finished.”