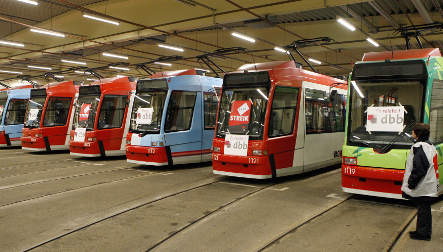 Trade union Verdi called transportation workers in Munich, Nuremberg, Fürth, Erlangen, Augsburg, Regensburg, Bamberg and Landshut to walk off their jobs during Tuesday’s early shift at 3:30 am. Metro trains remained in depots as the some 6,500 workers in the region pressed their demands for a salary increase of 9.5 percent – or at least €250 more each month.

“In Munich the metros and trams are standing still today,” Verdi’s leader in Munich Heinrich Birner said, adding that some 900 workers would likely strike in the city on Tuesday.

U-Bahn stations will remain closed until the strike ends in the afternoon, but an emergency schedule is in place, Munich’s transportation system MVG said. Some 200 privately run buses are on roads to help morning commuters make their way to work. Public transportation schedules are not likely to recover until evening, MVG said.

In unrelated strikes between states of Saxony, Lower Saxony, and Mecklenburg-Western Pomerania and their public workers, unions are angling for an 8 percent pay raise for more than 700,000 employees in three states. So far the states have not made an offer.

Schools were on the verge of cancelling classes in some cities because teachers wanted to take part in the strike, news agency DPA reported. About 320 schools are expecting warning strikes, the union for education GEW said.

Other workers in building management, tax offices, kindergartens, schools, clinics, police, fire department in the three states walked off the job at 6 am.

Verdi head Frank Bsirske is expected to speak at a large demonstration in Hannover.