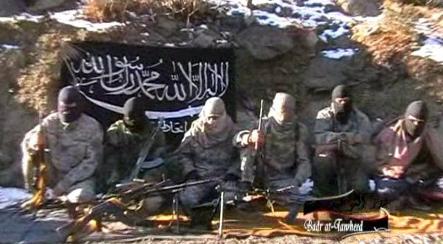 A screenshot from a recent terrorist video message. Photo: DPA

The anonymous official from the Central Intelligence Agency told German news agency DDP that Washington’s intermediaries in Pakistan had supplied information on German Muslims plotting to return from training camps in northwestern Pakistan just a few weeks before the parliamentary election in September to prepare attacks on “high-ranking targets” in Germany.

The official said it is highly likely the attacks would be carried out by suicide bombers, who could move unnoticed among society. Al Qaeda wants to use “massive violence” to influence the German voters to push the next government to withdraw German troops from Afghanistan.

Referring to concerns recently mentioned by German security services about the increasing number of threats directed at Germany, the official said US intelligence agencies believe that al Qaeda could be planning an attack in Germany “along the lines of the attacks in Spain” in 2004.

The horrific terrorist attacks on four commuter trains in Madrid on March 11 that year led to a change of government in the national elections three days later and to the immediate withdrawal of Spanish troops from Iraq.

The danger in Germany, unlike Spain, is that a considerable number of Muslim terrorists are living there covertly – some of them Germans who have converted to Islam. These people offer considerable support to those returning from training camps. “We know from our German colleagues how difficult it is to detect Islamist terrorists with a German background and who even look German,” explained the CIA official.

Bekkay Harrach, a German with Moroccan roots who is reportedly the head of strategy for al Qaeda, has threatened attacks in Berlin, Cologne and Bremen shortly before the elections on 27th September if Germany does not withdraw its troops from Afghanistan.

Amid growing terrorist threats against Germany, the police union GdP warned on Monday of poor security across the country.

“The situation is very serious,” GdP head Konrad Freiberg told the Dortmund paper. “Everyone is talking about bailouts for banks and companies. We finally need a functioning protective shield against terrorism,” he said.

Since September 11, 2001, some 10,000 more police posts have been filled in Germany, but it is still not enough, he said. “We are not at all in the position to conduct around the clock surveillance on the so-called ‘threats,’ a group of some 60 to 100 people,” Freiburg told the paper. “We don’t have the personnel.”

But Germany, as the third largest contributor of troops to Afghanistan, is a major target, he said.

“The terrorism danger is there, but not ubiquitous,” he said. “As long as nothing happens, awareness of the problem is missing.”