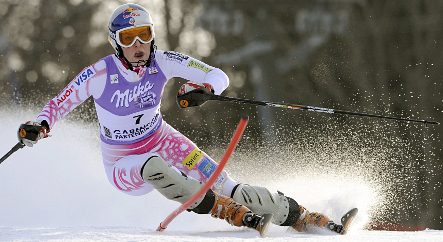 Vonn made it 17 wins on the circuit after posting her fourth success of the current campaign, seeing off Germany’s Maria Riesch by 0.9sec and Slovenia’s Marusa Ferk by 1.16sec. And the American was delighted to step onto the podium alongside locally-born best friend Riesch.

“It was a great day for us both, I am just as happy for Maria,” said Vonn. “I am really, really happy with this result, I am so pleased I was able to be on the podium, especially in Garmisch. I had two good runs, the second one I was really able to attack. I have always said Maria would be really strong and she skies all five

The victory was a confidence booster for Vonn before the World Championships begin in Val D’Isere, France, next Tuesday and leaves Vonn on 1014 points, 124 clear of second-placed Riesch.

begin. But local-girl Riesch was delighted to be on the World Cup podium for the

first time in her home town.

“To stand here on the podium is a dream come true for me,” said the smiling 24-year-old. “There was a lot of expectation on me, but I am so pleased.”

And her coach Mathias Berthold praised “the very good performance.”

“But Lindsey was already very far away, we will have to work hard before

the world championships next week.”

For Slovenia’s Ferk, it was her first time on the podium and the 20-year-old was delighted with her finish.

“My best result before today had been 15th, so this was a really big step for me. My expectations ahead of the World Championships are now much higher and I am aiming to improve on my previous placing of 26th at the last champs.”