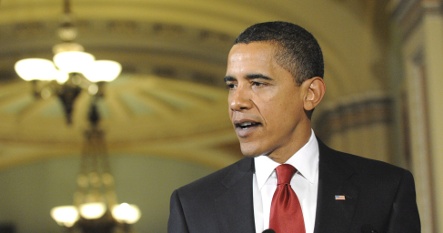 Some 76 percent of 1,000 people surveyed by pollster Forsa for weekly magazine Stern said Germany needed a politician with the same sort of charisma as the new American leader.

With 86 percent wanting a “German Obama,” supporters of the environmentalist Greens were the most enthusiastic about having their very own Barack. Some 83 percent of centre-left Social Democrats (SPD) were keen on the idea, whereas only 76 percent of backers of Chancellor Angela Merkel’s conservative Christian Democrats were. Even 74 percent of supporters of the hard-line socialist Left party thought Germany could benefit from someone like Obama.

Amid the euphoria of Obama’s first days in office, former Chancellor Gerhard Schröder said Germany should appoint a cabinet minister from the country’s large Turkish minority in the name of diversity.

In an interview to be published Thursday, Schröder said Germans should see a “role model” in Obama as the first African-American US president.

“After the general election in (September) 2009, it will hopefully be the time (for a minister of Turkish origin) – and allow me to say, it should be a Social Democrat,” the former leader of the SPD told monthly magazine Cicero.

There are about 2.8 million people of Turkish origin living in Germany.

The Greens in November became the first major party to elect a Turkish-German as leader, Cem Özdemir, which prompted members to adopt the tongue-in-cheek slogan “Yes We Cem” based on Obama’s motto. In 1994 Ozdemir became the first politician of Turkish origin to be elected to the German parliament, just two years after taking German citizenship.

A study published this week, however, called Turks the least integrated group of immigrants in German society, with poorer academic achievement and drastically less success in the job market.

Most Turks living in Germany are the descendants of participants in a “guest worker” programme in the 1960s that recruited Turkish labourers to do work Germans refused to perform. But even third- and fourth-generation Turks who had never lived in Turkey were often regarded as temporary guests rather than immigrants until Germany passed a reform of its blood-based citizenship laws under Schröder in 1999.