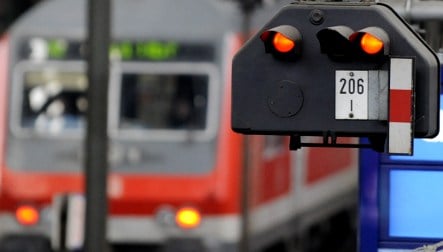 Nine German cities will suffer delays beginning at 4:30 am when train workers walk off their jobs until mid-morning, the unions said on Wednesday. Deutsche Bahn workers in Cologne, Düsseldorf, Bremen, Hamburg, Berlin, Saalfeld, Magdeburg, Nuremberg, and Munich will all take part in the “warning signal for the employer” amid gridlocked talks over better work schedules, the unions said.

Transnet head Alexander Kirchner accused Deutsche Bahn of “stonewalling” the unions after a third round of talks in Frankfurt. Both unions are fighting for at least 12 free weekends per year and better nightshift regulations for some 130,000 workers, in addition to a 10 percent pay raise.

Deutsche Bahn has offered a one percent pay raise for 2009 and 2010, and a one-time bonus. Insiders had said the company would make a new deal attempt on Wednesday, but the unions reported they had not received another offer.

The unions said they would not strike again between Friday and Monday out of respect for passengers.

Customers affected by delays can get their tickets refunded until February 15, Deutsche Bahn said, adding they had set up a toll-free hotline for strike information on: 08000 99 66 33. Passengers can also check their website for news of delays and cancellations.

Train conductor union GDL is also wrangling with Deutsche Bahn over a 6.5 percent pay raise for its 12,000 workers, but does not yet have any strikes planned.