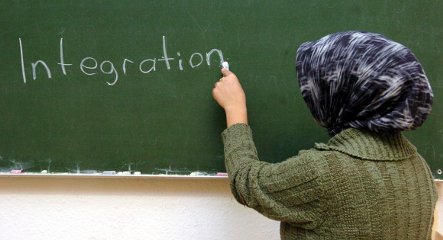 The Berlin-based Institute for Population and Development on Monday released a survey rating how well immigrant communities were integrating in Germany, re-igniting a national debate on the subject.

Turks, Germany’s largest minority group, didn’t fare very well in the study, which showed them lagging being other immigrants when it comes to education and jobs.

Recognising there was room for improvement even a few years ago, the German government started requiring some foreigners to take language instruction and cultural immersion classes in 2005 before they could receive a residency permit.

But most disenfranchised Turks are the descendants of so-called guest workers who came to West Germany during the country’s post-war boom years, meaning very few of them would be helped by the government’s integration courses for recent arrivals.

However, even citizens of the European Union, long-term residents such as Turks and other newcomers to Germany not obligated to take an integration course can also apply to take the classes as a cheap way to learn basic German.

Offered by a myriad of private and public organisations, an average integration course consists of 600 hours of language instruction and 45 hours of introduction to German culture, politics, history and daily life spread out over six months. Normally, participants contribute €1 to each class.

At Hamburg’s Colón Language Centre, the integration course this correspondent attended was broken into two parts. From 8:50 am until 11:15 am each weekday, students learned grammar, vocabulary and pronunciation. Most of the morning was spent copying terms from the blackboard. Questions were welcome, but only if they were in German and at a recent class few people spoke up.

The course brought people from Syria, Peru, India, Italy, Iran, Tunisia, Egypt, the Philippines, Turkey, Colombia, Brazil, Tibet, Belgium, the United States and Spain together for half a year, and varying social mores, educational backgrounds and ages occasionally caused a clash of cultures. A brief lesson on the German word for kissing, for example, upset the women from Egypt and Tunisia. And one person’s idea of helpful instruction was another’s idea of being bossy.

But sometimes the global mix made things interesting. After unanimous approval of students, the class hosted a Christmas party. Instead of a variety of salty Teutonic snacks, revelers ate delicacies from around the world. And simply because they sat next to each other in class, a Spaniard ended up learning standard German greetings from a young bride from Turkey.

The most difficult aspect of the course was the German-only policy. Teachers often had to use pantomime, drawing and exaggerated faces to teach basic grammar concepts.

From 11:30 am until 1 pm, students received practical application of the morning lessons. For example, students took turns asking “shopkeepers” for items on their shopping lists and their prices, following vocabulary lesson in grocery items. Some students found these types of lessons tedious. During the short break between classes, a few people would follow their only lesson plan for German culture by grabbing a beer or two from the nearby Hofbräuhaus restaurant.

At first, most participants seemed to find the course a necessary evil, because it was time consuming and required considerable effort. But by the end of the sometimes grueling instruction they all agreed they understood German language and culture much better than before.

For the standard integration course, students spend 20 hours a week in a classroom and teachers recommend students hit the books for at least two hours a night at home – living little time to make a living.

Rafael Jacome, a marketing professional in his native Belgium, had financial concerns but wanted to stick it out in the integration course.

“If I continue to study then I will have better opportunities for work,” he said. “At the moment, I can get a job as a waiter or at a bar or at a club. But these are not fulfilling jobs. My priority is learning German. I want to speak good Deutsch.”

Part-time integration courses are available, but few immigrants seem to know about this rare option. The government also has classes for the elderly, youths, adults who cannot read, and women only. Some people in the classes at Colón could have benefited from placement in a slower course, but instead three individuals were asked to leave because they were not progressing.

“The teachers are good, but it is a little bit too fast,” said a 27-year-old Tibetan refugee called Samten, who already speaks Tibetan, English and Hindi, said.

Despite the speed and difficulty of the course, most still found the integration course useful. Brazilian student Ana Criviv was soon able to understand instruction at her new gym. And after two months in the class, Samten said he could already better navigate life in Germany.

“I think they prepare the classes in a way that I can use in the real world,” said Criviv, who admitted she spent three hours a night studying German on her own. “For example, I can now order when I go to restaurants.”