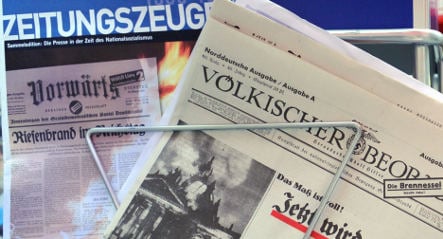 But the third edition, set for release on Thursday, won’t include original Nazi publications.

“We will not contravene the Bavarian government, but I can’t say what the next edition will include,” publisher Peter McGee told The Local from his office in London. “Since legal action has been taken we are respecting their request and seeking legal advice, though a response to our lawyer’s inquiries has not been forthcoming.”

Zeitungszeugen – or Newspaper Witnesses – includes three to four original newspaper sections from 1933-1945 sandwiched between commentary and analysis from a team of experts, and sells for €3.90.

But last week the Bavarian Finance Ministry announced it owned the rights to the original Nazi publishing house Eher and demanded the publishers stop producing the paper and withdraw the first two editions, which included a reproduction of the Goebbels’ newspaper Der Angriff or “The Attack” from 1933, and the Völkischer Beobachter or “People’s Observer.” After the Finance Ministry lodged a formal legal complaint, police announced they had confiscated some 2,500 copies of the publication.

Since then, the German Jewish Council has said it supports the ban, calling the publication an irresponsible example to burgeoning neo-Nazis.

“We expected some reaction, but not quite this level of controversy,” McGee told The Local. “We did want people to engage in debate, though.”

McGee has led similar projects in eight other European countries, including one in Austria called NachRichten last year. But that publication was endorsed by the Ministry of Education and used by teachers, according to McGee. “People quickly understood that it was a serious attempt to address historic material,” he said.

Zeitungzeugen editor Sandra Paweronschitz attributed Austria’s acceptance to two factors. “First, Austria has successfully hidden behind the assumption that it was the first victim of Nazi aggression and had nothing to do with the whole outrage. The criminal country is still Germany,” she told daily Der Tagesspiegel on Tuesday. “Second, I have the impression that obedience to authority is more deeply ingrained,” saying that many leaders said they like the project, and Austrians seemed to accept this.”

Both Paweronschitz and McGee have defended the publication saying they chose the country’s best historians to steer the publication and provide analysis on the newspaper reproductions. For the time being, however, they will not reprint Nazi newspaper sections until they reach a legal compromise with Bavaria.

“It has certainly become a hot potato in Germany,” McGee said. “But many seem to understand what it’s supposed to be and we’ve had a lot of support.”

After the war, the US gave the Bavarian state government copyrights for Nazi party publications, including Adolf Hitler’s book “Mein Kampf.” It was also given the explicit responsibility to prevent the further propagation of Nazi propaganda.