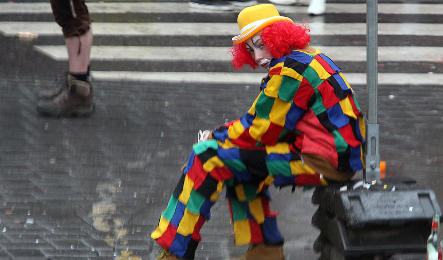 “Karneval earns €2 billion each year, but we, the keepers of tradition, are haemorrhaging,” said Udo Koschollek, member of the traditional “blue-gold” citizen guards, who take part in the parades each year.

This year’s festival motto is “Unser Fastelovend himmlisch jeck,” or “Our festival of heavenly jest,” in Cologne dialect, but with Karneval set to begin in just a few weeks on February 19, the joke seems to be on organisers.

Sponsorship and donations are down by more than 50 percent, Express reported. Even main corporate sponsor Ford has tightened its belt, cutting funding to the one of the main ceremonies for the festival’s three main figures, the Dreigestirn, or triumvirate, who are granted the titles of virgin, prince and farmer.

The traditionally sold-out festive fundraising meetings have had 30 percent fewer visitors too and several have had to be cancelled.

Smaller budgets mean that organisers have also reduced the amount of Kamelle, or party favours, that floats will distribute during the Karneval’s most important parade, the Rosenmontagszoch.

Planned participation by dancers and parade corps members, traditional Karneval favourites, is down 40 percent, the Cologne paper reported. The cost of large dance programmes simply can’t be sustained, and Karneval committees aren’t booking as many performers.

“They are the first numbers to fall victim to saving measures,” honour guard head Ralph Klose told the paper. “Now it’s just the people who do it on a volunteer basis. That is bitter.”

Each year the Karneval opens on the eleventh day of the eleventh month at 11:11 am – but only for one day. Then the festival, based in Catholic traditions, is suspended through Advent and Christmas until the New Year when the Jecken, or jesters, hit the streets for several days of alcohol-fuelled celebration beginning on the Thursday before Lent.