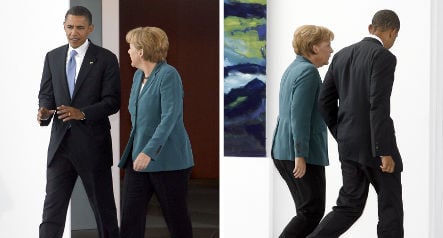 “The economic and finance crisis were at the centre of the call,” Ulrich said in a statement. “A close international cooperation is decidedly important to fight these, particularly at the G-20 summit on April 2 in London.”

The “friendly” talk also discussed troubles in Afghanastan, the Middle East, and climate change, Ulrich said, adding that the two leaders were united on the importance of working together.

Sarkozy’s office said he and Obama had discussed Afghanistan, the global economic crisis, and the new US leader’s promise to shut down the Guantanamo Bay terrorist detention camp during a 30-minute conversation. A French statement said they had pledged to cooperate in a “resolute fashion.” They also discussed Obama’s pledge to renew the NATO offensive in Afghanistan and Sarkozy congratulated his commitment to Middle East peace.

Meanwhile Obama and Russian President Medvedev both agreed on the importance of stopping the “drift” in US-Russia relations and the need to meet to discuss shared challenges, White House Press Secretary Robert Gibbs said.

Medvedev last week said Russia was ready to cooperate with Obama on Afghanistan and help with the transit of supplies and in the fight against terror. But the Russian president, as well as Prime Minister Vladimir Putin, have also made clear that they expect Obama’s fledgling administration to work harder on US-Russia ties after prickly relations under president George W. Bush.