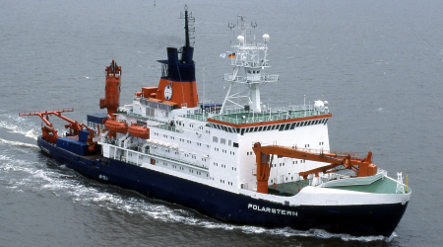 The research vessel Polarstern in a file photo. Photo: DPA

The public nature of the row is a sign of deteriorating relations between the two ruling parties ahead of September’s general elections.

Research Minister Annette Schavan, who is a member of Merkel’s CDU, gave the test the green light Monday saying “after a study of expert reports, I am convinced there are no scientific or legal objections against the… ocean research experiment LOHAFEX.”

However, a spokesman for the environment ministry, headed by SPD member Sigmar Gabriel, later said in the statement that the ministry “regrets the decision” to approve the LOHAFEX test.

An expedition set sail from Cape Town in South Africa on January 7 and is poised to drop six tonnes of the dissolved iron over 300 square kilometres (115 square miles) of ocean.

Gabriel had reportedly told Schavan in an earlier letter that the experiment “destroys Germany’s credibility and its vanguard role in protecting biodiversity.”

Scientists on board the Polarstern research vessel hope the release of iron will cause an exponential growth in phytoplankton, which will then absorb more carbon dioxide – the main greenhouse gas -through photosynthesis.

But opponents of the plan fear the consequences could be catastrophic. They are concerned it could cause the sea to become more acidic or trigger algal blooms that would sap oxygen from swathes of ocean.

Once written off as irresponsible or madcap, geo-engineering schemes such as LOHAFEX are getting a closer hearing in the absence of political progress to roll back the greenhouse gas problem.

Other, far less advanced, projects include sowing sulphur particles in the stratosphere to reflect solar radiation and erecting mirrors in orbit that would deflect sunrays and thus slightly cool the planet.

Green groups worry that such projects could cause more problems than they resolve. They also say these schemes’ financial cost is unknown – and possibly cost far more than reducing emissions in the first place.