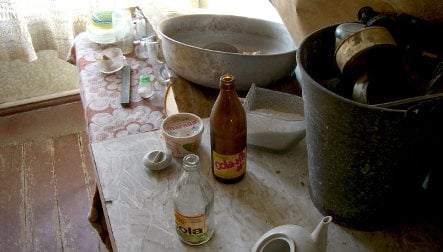 “Everything points to a hurried departure,” Architect Mark Aretz told the paper. “Apparently the inhabitants absconded during the commotion when the Wall came down.”

The 40-square-metre apartment, which Aretz found in November while preparing to renovate the building on Crottendorfer Straße, still holds clues to daily life in the former German Democratic Republic (GDR), Aretz said.

Aluminum flatware, plastic dishes, “Vita” brand cola and other food packaging, plus 20-year-old bread rolls all fill the kitchen, where a wall calendar reads August 1988 – almost a year before the Berlin Wall came down in 1989.

“It feels like it’s an archeological find when looking at these banal everyday items, like it’s a historic treasure chamber,” 44-year-old Aretz told the paper, adding he could not explain how the two-room apartment, built circa 1890, had somehow not been renovated, even though others in the apartment had been.

News agency DDP reported Monday that the Leipzig city water provider confirmed that the bill had been paid up to 1992 and it was likely taken over by the building’s owner.

The occupant appears to have been a 24-year-old man from Leipzig, judging from personal documents left behind. Letters from his sister and law enforcement documents also reveal that he had trouble with the police and served a one-year jail sentence. Other documents show East German police had searched his car and confiscated a magnetic tape recorder.

Aretz, who said he has renovated hundreds of former East German apartments has come across abandoned apartments before – thousands of GDR residents fled westward as their oppressive government came apart at the seams in 1989. But he said it had been some 13 years since he last saw one that had remained untouched.

Despite its novelty offering a look into everyday life in East Germany, the apartment will not be preserved and renovations will continue, Berliner Morgenpost reported.