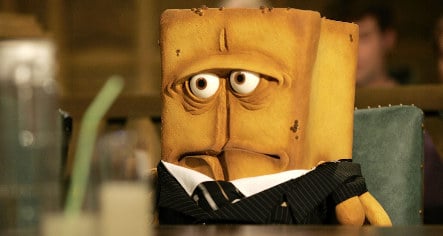 A two-metre-tall likeness of the surly orange-brown tin loaf went missing from its post in front of the city hall building weeks ago and a letter from group of squatters claiming responsibility for the abduction soon surfaced. Then the leftists followed up with a video of their doughy “hostage” complete with commentary sympathetic to the squatter’s plight in Bernd’s own deep voice.

“The squat must absolutely stay! I’m prepared to show myself in public again, but I can’t at the expense of my conscience,” says Bernd in the video while being shown the premises – raising the possibility that the loaf of bread has developed Stockholm syndrome during his captivity.

“You just don’t do that!” Kottkamp told newspaper Die Welt. “We would have to ask Bernd, but he himself certainly wouldn’t have agreed to this.”

Using one of Bernd’s favourite expressions, Kottkamp said the grumpy TV character considers abductions – especially his own – Mist, which is the German word for “crap.”

However, the award-winning loaf of bread is also known for being irredeemably fatalistic as he endures countless hardships in life, so if any Ki.Ka star was going to be abducted it he’d probably think it would have to be him.

Negotiations between city authorities and squatters known as Team 129 A broke down weeks ago after the building occupants rejected an offer for alternative housing. Their eviction was postponed on Friday until February 15, according to the group’s website. Their squat is to be converted into apartments and office space.