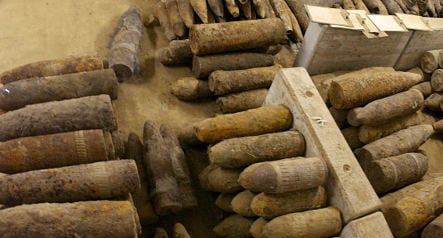 A file photo of a museum full of old WWII munitions. Photo: DPA

Clean up crews will work to uncover old bombs and grenades at some 500 points, city development head Ingeborg Junge-Reyer told the paper.

The bomb recovery is part of the city’s work to adhere to the United Nation’s International Civil Aviation Organization (ICAO) requirements, which state that big planes like the Airbus A 330 – which land and take off at Tegel – need wider runways.

As the Berlin city government discussed the project, politicians called Tegel an “objectively dangerous situation” because of “live munitions near the ground surface” that could be detonated by vehicles, airplanes or “mowing and landscape work that digs into the ground,” the paper reported.

The head of Berlin’s civil underground engineering department Frieder Bühring told the paper that the “suspicion” of old munitions was not adequate for the city to undertake a preventative clean-up project, but that it was necessary to protect workers from potential explosions during the runway expansion. The chance of a bomb going off, however, is as likely as winning the lottery, he added.

Another major ordnance find cropped up on the Baltic Sea coast in September 2008 when municipal workers spotted a four-metre long (12-foot) piece of a World War II era torpedo near the Timmendorf beach.