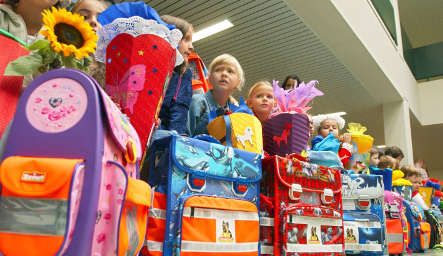 Their English may stink, but at least they have the proper backpacks. Photo: DPA

The magazine cites a summer 2008 study by English education expert Heiner Böttger, who found that 95 percent of fifth-grade English teachers in the state of Bavaria saw no difference between the performance of their students who had – or hadn’t – previously studied English. Two-thirds of these instructors told the professor at the Catholic University of Eichstätt-Ingolstadt that they felt early English lessons were “unnecessary,” the magazine reported.

“The way things are going now – it’s not working,” head of the German philological association DphV, Heinz-Peter Meidinger, told The Local on Thursday. “There have already been studies that found similar results.”

Meidinger, who also heads the Robert-Koch high school in Deggendorf, Bavaria, confirmed that differences between students’ language abilities differ greatly because many elementary teachers have not been properly prepared. That forces them to begin English lessons at the lowest level for all pupils. He said they are often able to repeat all of what students learned over four years of primary school in just four to six weeks.

“There are two reasons for the problems,” Meidinger said. “First, the teachers are not getting enough training. Second, there is no standardisation.”

The problem of preparedness will be solved within the next two to three years as universities educate pedagogic students to suit the changing needs of schools, Meidinger said. But national standardisation could take longer. Elementary schools have standardised requirements for only German and mathematics. Without a curriculum, teachers use songs and fun activities to awaken a youthful interest in language, meaning students have no grasp of English grammar by the time they reach fifth grade.

“Without standardisation and testing, the end effect is a false promise to disappointed parents who assumed their children were being prepared for the next level,” Meidinger said. “And the children’s excitement from the songs ebbs when they find they haven’t really learned anything as they move on.”

According to Der Spiegel, after the country’s embarrassing show in the European standardized PISA test performance, political pressure to institute early language training was too great to thoroughly implement proper reforms. But German schools could “theoretically” muster the political will to establish language standards at the elementary level in one or two years, Meidinger said.

“Otherwise we need to ask ourselves whether we will keep going with the instruction,” he said.