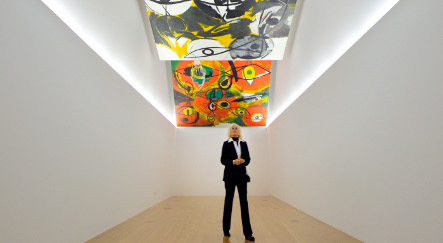 Greening – Landscape Design in and from Beijing

China is experiencing a building boom, with dazzling skyscrapers going up everywhere from Shanghai to Shenzhen. But what about the nation’s outdoor spaces? Pay a visit to this new exhibition at Berlin’s ifa-Gallery to see just how advanced China’s landscape architects are.

Replicas of hand puppets created by Paul Klee for his son Felix between 1916 and 1925 star in this puppet film for kids, screened at the Neue Nationalgalerie this weekend. It’s part of the museum’s extensive exhibition on the Bauhaus master, so be sure to check out the paintings after the theatrical fun.

The Brooklyn rockers have taken a turn into epic anthems with their latest disc Receivers. Rock out to their noisy guitars and keyboards Monday night at Blue Shell.

Take your place on one of the Persian carpets laid out on the marble floors of Cologne’s Basilica of the Holy Apostles this weekend. As purple and orange projections sweep across a gothic ceiling the sounds of ambient dub fill the air.

Thirty large paintings and eighty-six works on paper, all created the decade before the German artist’s death in 1968, comprise this fascinating new exhibition, which opens Thursday at Frankfurt’s Schirn Kunstahalle. Don’t miss the “Nay Room” from the 1964 Documenta III in Kassel.

The Hamburg Planetarium just updated its digital universe-simulation software, which means those celestial galaxies will be more realistic than ever! Check it out Wednesday with the premiere of a new show called “The Power of the Stars – From the Sky Disc to the Sun Tower.”

From bridal gowns, to fancy cars, to disco DJs, everything you need for your perfect German wedding will be at Hamburg’s Messe this weekend. Go and take a stroll down aisles of white lace and crinoline.

Location: Hamburg Messe und Congress, Halls B3 and B4, Messeplatz 1

You tried jogging, yoga, and even water aerobics, but you just can’t seem to find your thing. Kinomichi, a form of Japanese martial arts, developed in Paris in 1979 could be just what you’ve been looking for. Berlin instructor Andreas Lange-Böhm teaches a two day workshop this weekend in Munich.

Relations have been bleak in the Middle East, but we must stay optimistic. Increase your knowledge on life in both Israel and Palestine with a series of films based on the region. Most are screened in their original Arabic or Hebrew, with English or German subtitles.

Kids have a hard time sitting through full-length ballet productions of Shakespeare plays. Sad, but true. Munich’s Bavarian State Opera does a wonderful job of getting the little ones excited for their shows with 30-minute “Introductions for Children” that take place just before performances. See how your seven to 14-year-olds enjoy the one on “Der Sturm,” a ballet based on “The Tempest,” Saturday.