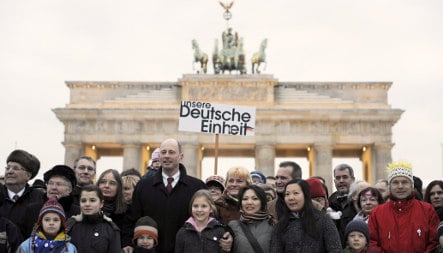 The richest 10 percent of the population in 2007 owned around 61 percent of the country’s privately held assets, up from 58 percent five years earlier, the report from the DIW Berlin economic institute showed this week.

The poorest 70 percent owned just under nine percent of the country’s wealth and 27 percent own nothing and/or have debts, said the study commissioned by the Hans Böckler Foundation, which is close to trade unions.

In total, Germans’ assets were worth €6.6 trillion ($8.5 trillion), meaning the average was €88,000 for each adult, a rise of 10 percent compared with 2002. But the median level, the midway point between the highest and the lowest, stayed stuck at €15,000 – meaning that the increase in the national average was just because the rich got richer.

And 20 years after the Berlin Wall came down – followed by unification in 1990 – the difference in wealth between west and east also widened, the study showed.

In the west, assets rose almost 11 percent between 2002 and 2007, but in the east they fell by just under 10 percent. Adjusted for inflation the fall was 17 percent.

“If politicians fail to act, poverty among the elderly in eastern Germany will grow sharply in the future,” the report’s authors Joachim Frick and Markus Grabka said in a statement.