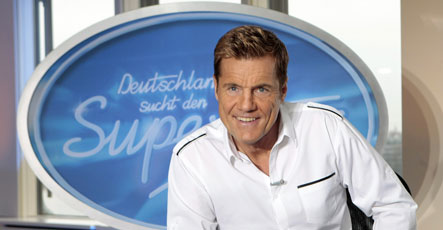 Who is he and why is he famous?

Apart from his excessive use of tanning salons and teeth-bleaching products, he is probably best known as the driving force behind the TV show Deutschland sucht den Superstar – better known as Pop Idol in Britain and American Idol in the United States. Dieda, as he is referred to in Germany, is famous for his unsparingly blunt and often harsh criticisms as a judge on the programme. He insults contestants and makes wisecracks about their singing abilities, or lack thereof. So he’s basically a Teutonic version of Simon Cowell with a fake tan.

Well, he certainly has an amazingly “rich” vocabulary when it comes to giving failed contestants a piece of advice for life. One fine example of his myriad pearls of wisdom that he shares with people on Deutschland sucht den Superstar is: “You sing like a garden gnome on ecstasy.”

Blimey! Who does he think he is?

Not that we know if he’s religious, but he carries himself like he’s second only to God. Bohlen is certainly convinced of his star power in Germany, even though most people have probably already suppressed it that he once had a music career of his own. Impressively, he’s even worked with other people you’ve either forgotten existed or never heard about like Bonnie Tyler, Howard Carpendale and Roger Whittaker.

So what did he do exactly?

Once up on a time, Dieda met a similarly well-tanned bloke named Thomas Anders. They founded the 80s pop band “Modern Talking” and composed a plethora of high-pitched falsetto tunes such as “Cheri, Cheri Lady” and “You’re My Heart, You’re My Soul,” which, up to this day, probably still haunt some Germans in their sleep.

Were they any good?

Oh, they had some hits in the charts and even won a few awards but as soon as falsetto and electronic 80s cheesy-goodness where out, they disappeared. That led Bohlen to focus on his other passion alongside music: women.

Not particularly novel for a pop star, is it?

No, but Bohlen excels at turning women he’s dated into other b-list celebrities. Not only are his love interests considerably younger than him, they almost all end up using their time with Dieda as springboard to fortune and fame.

Certainly not. Aside from the Teppichluder incident, where he was caught soiling a store’s carpet with a shop girl, he’s bounced from one young exotic beauty to the next.

So aside from bumping into him at the tanning salon or while picking up my daughter from school, where else would I know him from?

Apart from the latest season Germany’s of Pop Idol show, he can be currently seen on telly in an advert licking margarine off his lips. Apparently he’s realised he’s not getting any younger and is looking to tap that demographic concerned about their cholesterol.

He’s also had three books written for him – I mean, he’s also written three books. True to form, two of them are about Bohlen. His autobiography “Nothing but the truth” and the self-improvement guide “The Bohlen Way” were both bestsellers in Germany.

So he’s not just vocal coach, but life coach as well, eh?

Not exactly. “The Bohlen Way” focuses more on bulldozing your way through life than anything else. His autobiography on the other hand revealed some really interesting things – such as the tidbit that he’s broken his penis…twice.

Um, so should I really ask what the third book is about?

His third tome revealed dirty little secrets about other celebrities. But some of his former friends got a restraining order and the publishers had to stop everything and come up with a new edition. He’s now confined his writing to a blog for German tabloid Bild.

Anything else I need to know?

Maybe one more thing. Dieter Bohlen is supposedly the only foreigner to ever receive the honourary title of People’s Artist of the Soviet Union in 1989. Apparently Modern Talking was big behind the Iron Curtain…