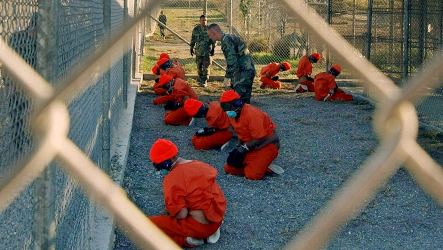 One of the most immediate questions that would arise should the jail on Cuba really be closed, is where released prisoners would be sent afterwards.

Robert Gates, the defence secretary under George W. Bush, who has been kept on by Obama, issued the tribunal moratorium directive on Tuesday evening, according to sources cited by CNN.

His office confirmed the directive would be considered by judges, and a decision reached as fast as possible.

The possible closure of Guantanamo prison, which has become a symbol of American excesses during the the Bush administration’s war on terror for many around the world, was welcomed by Karsten Voigt, German government coordinator for German-American cooperation.

He told Deutschlandfunk radio he was very pleased with the order of the new US President, adding that Obama was not just depending on his country’s military might, but also wanted to repair its image.

The Social Democrats (SPD) have largely been willing not only to accept back any German prisoners who might be released, but have also indicated they would consider taking others whose home nations refuse to take them or are considered too dangerous for them to return to.

Foreign Minister Frank-Walter Steinmeier, who is also the SPD chancellor candidate, said as much shortly before Christmas, although his idea was immediately slammed by Chancellor Angela Merkel’s conservative Christian Democrats (CDU).

Interior Minister Wolfgang Schäuble, CDU, said that although Germany would accept any former Guantanamo prisoners who had a right to be in Germany, he did not think there were any, and that others were not his problem.

Schäuble said he agreed that those who were being held illegally must be freed, but told the Frankfurter Rundschau newspaper: “If they come from countries to which they cannot return for human rights reasons, they will have to remain in the USA.”

He also asserted his jurisdiction over the matter, saying with one eye on Steinmeier, that the matter was one for the interior minister.

Several military tribunals will be affected immediately – including those of Khalid Sheikh Mohammed and Ramzi Binalshibh, who have admitted involvement in the September 11, 2001 attacks. Binalshibh was one of the ‘Hamburg cell’ surrounding Mohammed Atta.

Also affected is the Canadian Omar Khadr who was arrested in Afghanistan when he was just 15, accused of killing an American soldier.

Mohammed and Kahdr have said they were tortured during their time in Guantanamo, making any tribunal legally difficult if not impossible to conduct.

Chancellor Angela Merkel successfully negotiated for Murat Kurnaz, a Turkish national with German residency rights, to be released from Guantanamo in 2006. Her predecessor Gerhard Schröder, whose chief of staff at the time was Steinmeier, did not try to get Kurnaz released, even though critics say it would have been possible.

Meanwhile Green MP Hans-Christian Ströbele, has called for Bush to be prosecuted for torture and abuse carried out in Guantanamo, and suggested that he might even be tried in Germany.