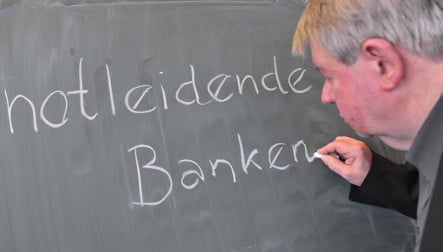 “It turns the relationship between the causes and effects of the global financial crisis upside down,” language expert Horst Dieter Schlosser said in a statement. “While the economy becomes increasingly strained and the tax payers have to bear billions in bail outs, the banks and their financial policies – which caused the crisis – are stylised as victims.”

The eighteenth annual Unwort des Jahres, or “Non-word of the Year,” contest began in 1991, calling on Germans to send in their suggestions for new words and phrases in public discourse they found especially grevious. A jury of language experts chooses the submission they feel best represents the year.

Among the runners-up from last year’s 2,117 “non-word” submissions were Rentnerdemokratie or “pensioner democracy,” in reference to a word coined by former German President Roman Herzog to describe a frightening society where the elderly majority plunders the wealth of the younger generations.

Past winners include Herdprämie, or “stove subsidy,” the 2007 un-word that refers to government benefits given to mothers who chose to stay home – cooking in the kitchen – to raise their children.