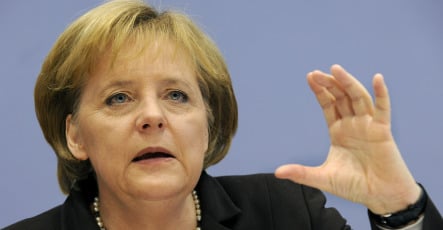 As the global financial storm broke over Europe last year, Germany was initially reluctant to follow Britain, France and other economies in paying huge sums to bail-out banks and businesses feeling the strain.

But in what she called the hardest domestic decision she has had to make as German leader, Merkel last week proposed a new €50-billion ($66-billion) package to haul Europe’s largest economy out of recession.

The measures come on top of a programme agreed in November that the government valued at 30 billion euros. The main thrust of the new package is a huge increase in public spending on roads, railways, hospitals and schools.

Other elements include cuts in tax and social security contributions, as well as incentives for consumers to trade in old vehicles for new “greener” cars to boost Germany’s ailing auto sector.

“In a period of deep global degradation like the one we are going through, the single European currency is a priceless source of stability and security,” Merkel wrote in her pan-European opinion piece. “If we didn’t have the euro, the first lesson we would have taken from this crisis is that we would need to create it as quickly as possible. This is why Germany will continue to deliberately make the rules of the European growth and stability pact its own,” she continued.

“In order to meet its national responsibility, the federal government has decided, in addition to having a plan to repay its debts, to lock long-term debt reduction into the German constitution.”

Under the Maastricht Treaty, eurozone countries are bound to keep public deficits at under 3.0 percent of gross domestic product (GDP).

Since the crisis began, however, many European governments have embarked on massive spending sprees to recapitalise failing banks, bail-out struggling industries and create public sector jobs, breaching that level.

Germany is one of the staunchest advocates of fiscal discipline in the EU but finance minister Peer Steinbrück has acknowledged that his country will break the EU rules in 2010 with a deficit above four percent.

This gloomy outlook was confirmed earlier Monday by the European Commission which predicted a public deficit of 4.2 percent next year as the German economy slams into reverse in 2009.

The rapidly weakening economy is also taking its toll on the labour market in Germany. Recent figures showed unemployment on the rise in December for the first time in 33 months to stand at over three million.

Nevertheless, German companies are in a better shape than in previous downturns to survive the recession, the Bundesbank said, as they have used a more favourable economic environment in recent years to boost their capital reserves.

“This cushion is currently offering them protection against the increasing difficulties resulting from the slowing of the global economy and the continued crisis on the financial markets,” the report said.