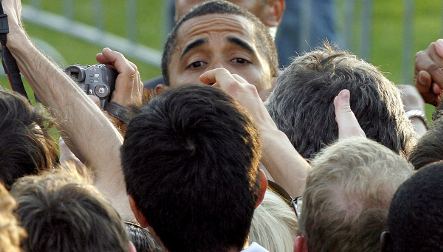 Obama mobbed by a crowd after his speech in Berlin in July 2008. Photo: DPA

Obama will be in Baden-Baden and Strasbourg for a NATO summit on April 3 and 4, accompanied by new Secretary of State Hillary Clinton, the magazine reported. He is also planning a speech in Berlin, inside government sources told Focus.

“Obama is expected to thank Berliners at the Brandenburg gate for their support during the campaign,” the magazine said.

In July 2008, Obama gave a speech before more than 200,000 jubilant supporters at the German capital’s Victory Column memorial at the heart of the city’s Tiergarten park as part of a foreign campaign tour in Europe.

He is rumoured to have favoured the city’s more symbolic landmark the Brandenburg Gate where former US President Ronald Reagan gave a famous speech in 1987, asking then-Soviet leader Mikhail Gorbachev to “tear down” the Berlin Wall. But German Chancellor Angela Merkel expressed reservations over letting the landmark become a backdrop for the US election campaign.

In the past, only elected US presidents have been allowed to speak before the symbol of German reunification. But after he is sworn in as the 44th president on January 20, the gate should be open to him.