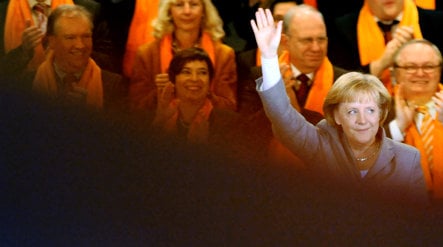 Merkel’s conservative CDU saw its share of the vote in Hesse inch up only four tenths of a percentage point on Sunday, but compared to the SPD, junior partners in Merkel’s national coalition, this was a dream result.

It took an even bigger hammering than pollsters had predicted: its share of the vote slumped 13 points to 23.7 percent, its worst ever result in the western state, and almost 14 points adrift of the CDU’s 37.2 percent.

The election was seen as a key test eight months before the whole country goes to polls on September 27, when the CDU and the SPD aim to ditch their national “grand coalition” and govern with someone more to their liking.

It is not just a two-horse race, however. In German politics, the smaller parties are key, often playing kingmaker for the larger players.

The CDU’s coalition partner of choice both at state and national level, the pro-business Free Democrats (FDP), had the best night of all the parties in Hesse, scoring 16.2 percent, a leap of 6.8 points.

This paves the way to the FDP and the CDU forming a coalition in the western state, the fifth such constellation nationwide, and in Germany’s five most populous states.

The ecologist Greens won 13.7 percent, up 6.2 points, while the far-left Die Linke just made it into the state parliament with 5.4 percent, up 0.3 points – a modest rise by their standards.

It is not the first time that the parties will get an insight into how voters are thinking: 2009 in Germany is “super-election year” with no less than 16 votes taking place at state, local, European and national level.

What is adding spice to this ballot box marathon is the fact that Germany is heading for its deepest recession since the Federal Republic was born in 1949 as the global slowdown hits its export-heavy economy.

Both the CDU and the SPD are having to work together in their “grand coalition” to beat the recession, while at the same time trying to score political points.

Last week, for example, the SPD’s challenger for the chancellorship, Frank-Walter Steinmeier, appeared by his opponent’s side to trumpet Berlin’s new economic stimulus plan — and party politics were absent.

So far, the 54-year-old Merkel appears to be much more popular with voters than her 52-year-old foreign minister. Forty-seven percent of voters polled last month had Merkel as their pick for chancellor, 25 percent for Steinmeier.

And despite criticism of Merkel’s reaction to the crippling slowdown, the Hesse outcome showed that the CDU appears not to be paying the price with voters, thanks largely to internal squabbling among the SPD.

Local issues were at play in Hesse, not least the disastrous decision in 2008 of the SPD’s local chief to renege on a pre-election pledge not to work with the the far-left Die Linke in her attempts to form a coalition.

But there was no denying that the Hesse vote showed that at national level, the SPD has a tough year ahead of it.

Political scientist Oskar Niedermayer of Berlin’s Free University said the SPD’s humiliating defeat in Hesse could have a “psychological effect” and throw the party off its game in the upcoming races.

“The SPD runs the risk of piling up disastrous electoral results every two or three months, which could have an impact on the outcome of the general election,” Niedermayer told AFP last week.

SPD party chief Franz Müntefering put a brave face on what he admitted was a “very bad result”, predicting optimistically that “on September 27 people will vote completely differently from today.”