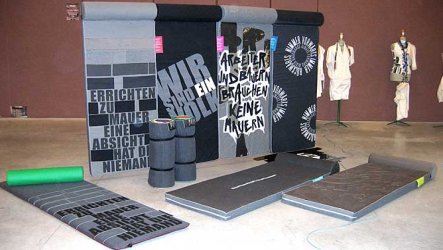 “We came up with the idea for the design initiative Create Berlin,” co-creator Juliane Zöller, told the Local on Thursday. “They wanted designers to deal with the 20th anniversary of the fall of the Wall and the shape of the old concrete elements inspired us.”

Together with her business partner Carolin Biegert and designer Josephine Rank, Zöller produced six squishy pieces of German history last summer. The 1.7-metre “walls” are covered with soft grey fabric with famous graffiti slogans like “no one has the intention to build a wall,” and “workers and farmers don’t need a wall.”

They have already been shown at an exhibition in London, Berlin’s new contemporary art centre the Temporäre Kunsthalle, and even graced the office of the German ambassador to England, Zöller said.

“It is obviously interpreted with a smirk, but I could imagine that some people might not see themselves in the mattresses,” the artist said, adding that so far, people have accepted the idea with a sense of humour.

“We thought we could afford to take on the subject without being dead serious because we all come from different parts of Germany and have experienced the time of the Wall from various angles,” the 34-year old explained.

Each of the six art pieces cost €900, but anyone who wants to buy the whole lot will get a slight discout at €5,000. But for those who don’t want to spend that much, the team developed the idea further and came up with inflatable and transportable Berlin Wall guest beds available for €150.

“There is no factory or anything. We sew them by hand on request,” Zöller said, adding that the funny Berlin souvenirs might soon be available in shops.