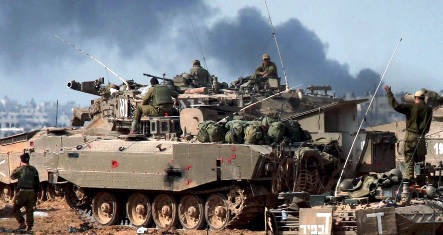 Steinmeier is to hold a series of meetings with leading Israeli officials before travelling to Ramallah in the West Bank and on to Cairo.

“The goal of the foreign minister’s efforts is to open a way towards a lasting and comprehensive ceasefire,” his spokesman Jens Ploetner said ahead of the trip.

Steinmeier would be adding his voice to the calls for an “immediate humanitarian truce” to stabilise the worsening situation and enable the political framework for a long-lasting ceasefire, he added.

France and Germany signalled Wednesday their support for Egyptian efforts to broker an end to the fighting between Israel and Hamas in the Gaza Strip.

Egypt said earlier it had obtained the agreement of Hamas to the “broad outlines” of its truce plan for Gaza, as the death toll from the fighting there passed 1,000.

Israel bombed smuggling tunnels and fought pitched battles with Hamas on Wednesday as UN chief Ban Ki-Moon arrived in the region, calling for an immediate ceasefire and underlining the key role played by Egypt. As diplomatic efforts to end the conflict intensified, the EU said it was breaking off talks with Israel over upgrading relations in response to its actions in Gaza.