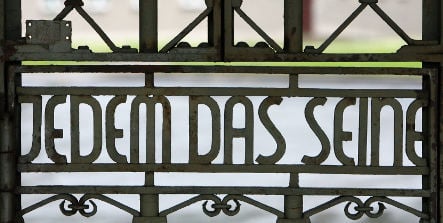 The firms caused a stir by using the phrase Jedem das Seine, a version of “to each his own,” which also hung above the entrance to Nazi concentration camp Buchenwald near the city of Weimar.

Tchibo plans to remove the signs, which were an “unfortunate” choice, as soon as possible, company spokesperson Angelika Scholz told the paper, adding that they “never intended to hurt feelings.”

The ad agency the companies hired was apparently unaware of the slogan’s historical use, Esso spokesperson Olaf Marin said.

The signs were either out of “unsurpassed tastelessnes” or an example of “total historical ignorance,” Salomon Korn, vice president of the German Jewish Council, told the paper.

Tchibo and Esso aren’t the first companies to make the blunder. Telephone company Nokia, grocery chain Rewe, Burger King and Merkur Bank have all fought PR disasters after using the phrase, which was originally coined by Roman philosopher Cato 2,000 years ago, in ad campaigns, the paper said.