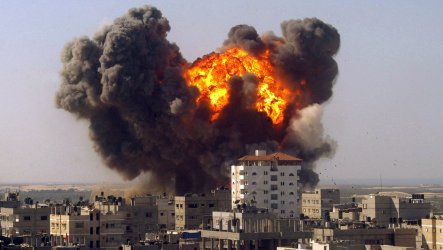 While 49 percent of those asked by pollster Forsa said the country was combative, 59 percent also said Israel follows its own interests without considering other countries.

Only 30 percent of Germans polled said they were confident that Israel follows human rights laws. Paradoxically, 45 percent poll participants also said they found Israel to be a likeable country.

Some 13 percent even said they questioned if the country automatically has a right to exist – which has been German government policy since Israel was founded in 1948 in the wake of World War II and the Holocaust.

Poll participants varied in their response to who is responsible for the current violence between Israelis and Palestinians. About 30 percent named Palestinian Islamist party Hamas, with older Germans and those who support Angela Merkel’s conservative Christian Democrats (CDU) more likely to take this opinion. Meanwhile younger Germans and supporters of the hard-line socialist Left party were more likely to blame Israel for the conflict. Some 35 percent said both sides bear responsibility for the violence.

Meanwhile, the majority of Germans – 60 percent – said they didn’t think Germany had any particular responsibility to Israel some 60 years after the end of the Third Reich. Young people, those from the formerly communist East Germany and supporters of the Left party were most likely to hold this opinion.

Forsa director Manfred Güllner told the magazine it was a “dangerous development” when young people no longer feel responsible for the history of National Socialism.