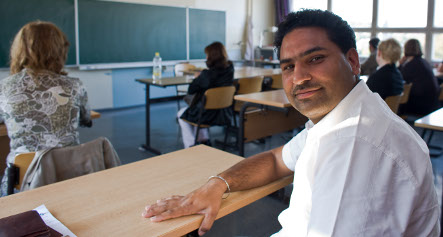 Despite criticism from immigration groups that Germans themselves wouldn’t be able to pass the 33-question test on German culture and history, most of the 18,000 applicants who took the test by the end of November had no problems, the immigration office (BAMF) told the paper.

Click here for sample questions from the citizenship test to find out how much you know about Germany!

“The 98.9 percent shows that the test is no ‘citizenship blocking test’ as it was initially criticized,” immigration commissioner for the state of North Rhine-Westphalia Thomas Kufen said, adding that the results are a “positive sign” for German society and immigrants.

But Green party immigration expert Monika Düker disagreed. “It is pure cramming and interrogation and has nothing to do with integration,” she told the paper.

The test costs applicants €25 ($38) per try, and they are given all the questions to study beforehand. Candidates must correctly answer at least 17 of 33 questions to pass. Those exempted include people who have gone through the German school system, those younger than 16 and older people with learning disabilities, according to the Interior Ministry.

Successful applicants also have to speak adequate German, have no criminal record and have been living in Germany for at least eight years. Candidates can retake the test as many times as they like.

Leaders from the country’s Turkish community have been particularly critical of the test. At 2.3 million, Turks make up the largest group of immigrants in Germany, and they have long pushed for the right to keep both Turkish and German passports. Around 340,000 people over 18 will soon face the tough decision of choosing between German or Turkish citizenship.