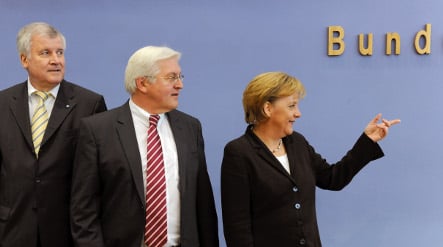 Merkel points the way for Steinmeier and Seehofer. Photo: DPA

After leaders of her left-right government thrashed out a deal overnight on tax breaks and public spending worth 50 billion euros (66 billion euros) over two years, Merkel said the measures were the right steps at the right time.

“With our ‘Pact for Germany’ we are providing the impetus … for growth, for employment in Germany, because employment for people is our overriding concern,” Merkel told reporters.

Merkel had just last month warned her European neighbours against a reckless “race to spend billions” to fight the global recession, preferring a wait-and-see approach. Since then, the pressure had mounted on the woman dubbed “Madame Non” in some European quarters to take more decisive action, as the world’s biggest exporter faced a deluge of grim economic news.

Merkel said Berlin had conducted a “sober analysis” of the crisis and determined that more urgent action was needed.

“This time has now come,” Merkel said, estimating the value of the package at 1.5 percent of Gross Domestic Product in each of the two years. Vice-chancellor Franz-Walter Steinmeier of the Social Democrats (SPD), who will challenge Merkel in September general elections, said no European country was doing more than Germany to boost its economy.

“When I look around in Europe, I don’t really see who is doing more and acting more appropriately than we are,” Steinmeier, who is also foreign minister, told a joint news conference.

The new package is a second, stronger shot in the arm for the world’s number one exporter after a first, €12-billion effort announced in November fell short.

Finalised in late-night talks between Merkel’s CDU conservatives and the centre-left SPD, it includes €17-18 billion in investments in roads and schools, and €9 billion in tax cuts for firms and individuals. It also includes a €100-billion loan guarantee programme to help stricken companies hobbled by the credit crunch, according to a copy of the agreement obtained by AFP.

It also includes cuts in health insurance contributions for employers and employees to slash the cost of job creation and to put more cash in shoppers’ pockets, and simpler rules on creating temporary work. But critics slammed the measures – many of which will only take effect on July 1 – as too restrained to reverse what economists warn will be the worst recession since 1945 and perhaps even the 1930s.

“It is ridiculous to believe that such puny amounts could stabilise the economy,” the leader of the opposition pro-business Free Democrats, Guido Westerwelle, told the Münchener Merkur newspaper, calling for deeper tax cuts.

The chief executive of the German Chambers of Commerce and Industry, Martin Wansleben, said firms would need more tax relief “before this legislative term ends” in September, in an interview with the Frankfurter Rundschau newspaper.

Analyst Holger Schmieding of Bank of America called the stimulus package “a very mixed bag. To stop and reverse the current downward spiral in investment and business early, an immediate stimulus to demand would have made most sense, for instance, a big immediate cut in payroll taxes,” he said.

Data in recent months have made it clear that the German economy is going south, with industrial orders and output falling off a cliff and unemployment on the rise in December for the first time in 33 months. Unemployment now stands at more than three million and economists fear one in 10 workers will be out of a job by the time of the general election in September. GDP could shrink three percent this year.