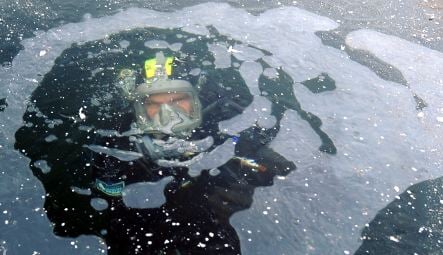 Police were too late on Monday to save a 44-year-old Raubling man from disappearing below the thinning ice on the Simssee, Bavarian daily tz reported on Tuesday.

Two men from the neighbouring town of Krottenmühl heard his cries for help and risked their own lives in an attempt to save him with a raft, but neither their effort nor the search by two police rescue helicopters were fast enough to find the man under the ice. Search efforts were called off just after 6 pm, the paper reported.

His death came after massive efforts by Bavarian police and water rescue workers over the weekend to save 19 other people who fell through thinning ice as the weather warmed.

“I have never seen anything like this in my 15 years on the job,” head of water rescue at the massive Wörthsee lake Christian Schlosser told tz. His team worked with police to get some 1,000 winter revellers off of dangerous ice on Saturday afternoon after accidents on the Pilsensee and Schliersee on Thursday and Friday, the paper reported.

On Friday afternoon a 38-year-old woman on ice skates with two small children – the youngest a six-month-old in a pram – fell through the ice, bringing her two-year-old with her as the pram rolled to a dangerously thin area. Bystanders were able to pull the mother and toddler from the ice, but the pram was unreachable, the paper reported. Then the ice below the pram began to sink as rescuers approached.

“It was a terrible sight,” Schlosser told the paper.

But rescuers managed to fish the baby and pram out of the water before it disappeared. “Everyone suffered a shock, including us,” Schlosser added.

Media footage shows rescue helicopters from the 200-man team hovering just metres above frozen lakes on Saturday while instructions to vacate the ice blast over loudspeakers: “Please leave the ice immediately. It is life threatening!”

“We had to go from one rescue to another because people kept miscalculating the ice thickness,” Schlosser told the paper, adding that thanks to rescuers no one died. “The story about the pram, for example, was down to seconds.”

While officials told the paper that Saturday’s efforts were an “exception,” they still had 80 rescuers out at Wörthsee to prevent further accidents on Sunday.

While the ice may seem like a good time for winter sports lovers, river shipping routes in northern and southern parts of the country continue to be severely affected by ice build-up, with some 50 ships locked into the Neckar river in ice up to 15 centimetres thick between Heilbronn and Mannheim, the shipping authority told news agency DDP on Tuesday. Meanwhile ships on the Schleuse and Elbe rivers are in a similar bind, with ice breakers out in full force to ease traffic.

Germany has suffered record-breaking negative temperatures over the last week as a cold snap continues to grip Europe.