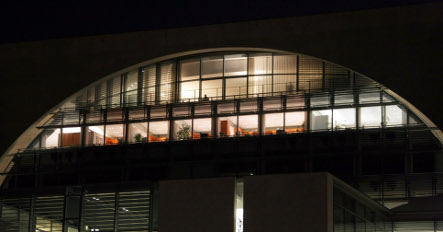 Talks went on late into the night at the Chancellory in Berlin. Photo: DPA

The package, worth €50 billion ($67 billion dollars) over two years, is a second, more powerful shot in the arm for Europe’s biggest economy after Chancellor Angela Merkel’s first effort last year proved too small.

Finalised in late-night talks in Berlin between Merkel’s CDU conservatives and the centre-left SPD, it includes €17-18 billion in infrastructure investments and tax cuts for firms and individuals.

It also includes cuts in health insurance contributions in order to put more cash in shoppers’ pockets, and simpler rules on creating temporary jobs, the heads of the main parties’ parliamentary groups said after the meeting.

“All in all this is a package that will help us to get through this economic crisis and keep jobs,” Volker Kauder, head of the CDU in parliament, told reporters late Monday.

But economists worry the package will not bear significant fruit as the main source of Germany’s strength in recent years – its export sector – is now its Achilles’ Heel, with the global downturn hitting foreign demand for its goods.

Data in recent months have made it clear that Europe’s biggest economy is going south, with industrial orders and output falling off a cliff and unemployment on the rise in December for the first time in 33 months.

Unemployment now stands at three million, and economists predict that one in ten of the workforce will be out of a job by the time the country decides in elections in September if it wants four more years with Merkel at the helm.

The government fears that the economy could contract by three percent this year, making 2009 the worst year since the modern federal republic rose out of the ruins of World War II in 1949.

Andreas Rees, Germany expert at Italian bank Unicredit, said before Monday’s announcement – the main outline was already known – that Merkel’s efforts come too late to stop the German economy shrinking in the first half of 2009.

The impact of the package will be felt only in 2010, Rees said, as the global economy begins to pick up.

The task of agreeing a second stimulus package was made all the more difficult by the fact that the SPD and the CDU are currently jockeying for position ahead of September’s vote.

Both parties want to win enough votes to be able to form a government with a different party, and as a result they were keen for the package to bear their own signature.