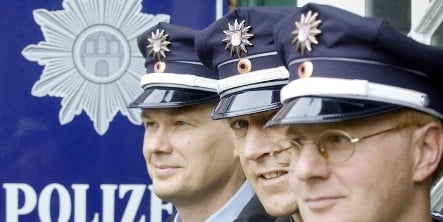 A row has blown up over the ruling from Werner Jantosch, limiting officers to wearing their peaked caps, even though these do not cover their ears.

He has even taken to checking newspaper photos of officers at accidents or other incidents to see who is sneaking a warm woolly over their ears while on duty, according to the Hamburger Morgenpost.

A newspaper photograph of an officer who was wearing a woolly hat while attending an accident in the Eppendorf area of the city led to a ticking off for the officer, the paper reports.

A spokesman for the police said no disciplinary measures would be taken against woolly hat rebels, but the police union is furious that the 5,000 officers have to break the rules to keep their ears warm.

Colleagues in Munich, Berlin, Hanover and Kiel have plain black woolly hats as part of their uniforms, a union spokesman told the paper. Those in Lower Saxony and Schleswig Holstein even have fancy models with a police shield and the word police sewn on.

But in Hamburg, only those on duty guarding endangered buildings such as consulates, have special permission to wear warm hats.

Joachim Lenders, head of the German Police Union told the paper, “The position of the police chief is not only embarrassing – the health of his officers must take priority.

“But perhaps sitting at his desk in his well-heated police headquarters, he cannot imagine that in temperatures like we have now, it is freezing when one is several hours on foot in the streets.”

Jantosch would only say, “This has been decided. We do not want knitted hats.”

He reminded reporters of the attempt, during the 1980s, to kit out officers with a Russian-style winter hat made of fake fur, which was rejected by practically all officers.