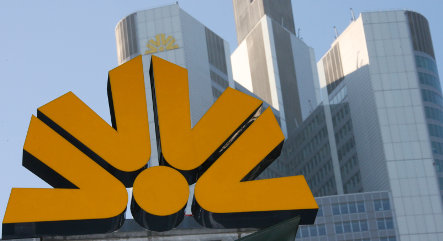 Commerzbank shares posted heavy losses on the Frankfurt stock market, with many analysts saying existing shareholders would be left holding the bag after the total amount of a state bail-out climbed to €18.2 billion ($24.9 billion).

That is more than 5.5 times the bank’s current free-floating market capitalisation of €3.26 billion, but as Baader Bank stock strategist Robert Halver told AFP: “There is no other alternative. The state is playing the role of mid-wife for a painful birth.”

Berlin said Thursday it would inject €10 billion into Commerzbank on top of an €8.2-billion cash injection in December to strengthen the bank as it buys Dresdner Bank from insurance group Allianz for an estimated €5.1 billion. The government also wants Commerzbank to continue extending crucial credit to German companies.

Both Dresdner and Commerzbank have suffered heavy losses stemming from the international financial crisis, but the state’s latest massive injection raised questions about what problems might lie ahead for the combined bank, which aims to be a counterweight to the biggest German bank, Deutsche Bank.

But Commerzbank appeared determined to wrap up its takeover of Dresdner Bank this month and needed the extra cash to ensure the deal goes smoothly. Most of the government’s investment was in the form of a “silent participation” that does not give it voting rights, though it was also buying 295 million new shares that would take its holding to 25 percent plus one share, effectively a blocking minority.

A Finance Ministry spokesman told AFP Friday that “it was expected to send two representatives to Commerzbank’s supervisory board” to “assume our responsibility in how taxpayer’s money is used.” But “the state does not intend to intervene in the bank’s operational decisions,” he stressed.

History thus repeated itself in part for the bank, which was nationalised by the German government in 1932 for five years, noted LBBW stock strategist Antje Laschewski.

“This memory creates a very negative feeling on the markets,” she said.

In addition, as the state becomes Commerzbank’s biggest shareholder, it will dilute current shareholders’ earning per share by 20 percent, Werle pointed out.

Holders of Commerzbank stock will also see it forced to reimburse “an annual pre-tax charge of €1.5 billion for the silent participations,” the analyst noted, because the European Commission set the interest rate on Berlin’s cash injection in December at 9.0 percent. In 2007, the bank’s best year ever, it posted a net profit of €1.9 billion.

After the news was announced on Thursday, Commerzbank shares hit an all-time low €4.47 before rebounding to close with a loss of 13 percent. On Friday, they showed a further loss of 7.43 percent to €4.86 in mid-day trading, while the DAX index of leading shares was essentially flat overall.