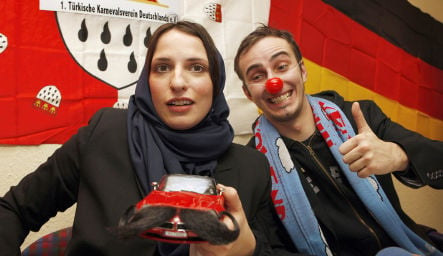 “We just wanted to show how Cologne would react to such an idea,” RTL told news agency DPA. “The immense media echo show that such an idea wasn’t so absurd.“

The supposed club founders held a large press conference that was heavily covered by German media. They suggested adding Turkish flair to Karneval by putting an enormous mustache on the famous Cologne cathedral, among other laughable ideas.

The Cologne Karneval committee, which had welcomed the announcement, took the joke lightly, saying it had brought an important issue to light. “With this at least it’s clear that many Turkish residents celebrate Karneval already,” committee chair Sigrid Krebs said. “The only thing that I find to be a shame is that it was carried on the backs of the Turkish population. The Turks were mocked.”

RTL’s spokesman said the lampoon, filmed for new comedy series TV Helden hosted by Jan Böhmermann, was “legitimate” and that no one was harmed.

Each year Karneval opens on the eleventh day of the eleventh month at 11:11 am – but only for one day. Then the festival, based in Catholic traditions, is suspended through Advent and Christmas until the New Year when the Jecken, or jesters, hit the streets for several days of alcohol-fuelled celebration beginning on the Thursday before Lent.

This year’s festival motto is “Unser Fastelovend himmlisch jeck,” or “Our festival of heavenly jest,” in Cologne dialect.