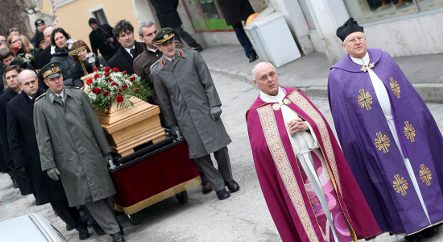 The 50-year-old state premier and the late 41-year-old Beata Christandl did not have alcohol in their bloodstreams at the time of the accident, Austrian state prosecutor Walter Ploebst said.

“Surely it was not easy for her,” Christandl’s widower said. “I have respect for Mrs. Althaus. Christandl also told daily Bunte that it does not matter who was at fault in the deadly collision, though he would like to know how it occurred. “It was an accident,” he said. “My wife is dead and she won’t come back to life.”

Althaus was taken out of an artificial coma last week but is still suffering problems with spatial and temporal orientation from brain trauma and was moved on Friday from Austria to a hospital in Jena, Germany that specialises in neurology, daily Bild reported.

The paper also reported that Althaus had been informed by a psychologist that Christandl was dead on Wednesday, but had to be told again because of short-term memory loss.

According to police, visibility was good at the Austrian Obersteiermark ski area at the time of the accident, and both skiers, described as experienced, had been travelling at a medium pace.

Althaus, who initially remained conscious, requested that the woman be treated first, and was only examined later at the bottom of the slope, where emergency medics were called. The state premier then lost consciousness during the helicopter journey to the nearest clinic, which was delayed by poor light.

But Althaus, now under investigation for involuntary manslaughter, does not remember what happened on the day of the fatal accident, doctors have said.