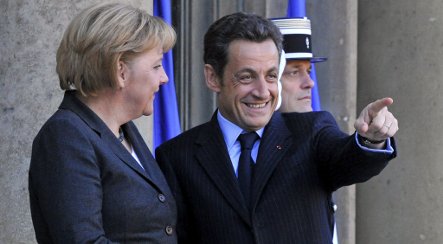 Welcoming international experts to a conference on the future of capitalism in Paris, Sarkozy said governments should have the bones of a new system of regulation ready before April’s Group of 20 summit in London.

Merkel came with an idea of her own – a powerful new economic council at the United Nations to oversee the financial markets. “No country can act alone in this day and age … even the United States, however powerful they may be,” she argued.

Both leaders urged the United States not to stand in the way of tighter controls on world financial markets, which they blamed for the crisis battering the global economy.

For the German leader, the United Nations could serve as a forum for creating a new international regulatory framework. “It is possible that alongside the Security Council, we could also have an economic council that would have a different role from ECOSOC,” Merkel said, referring to the United Nations Economic and Social Council.

Merkel said ECOSOC – set up to coordinate policy between the UN’s various agencies – was not a viable forum for economic decision-making as it “spends months, sometimes years writing up expert reports.” She called for the creation of a world charter for “a long-term sustainable economy” along the lines of the UN charter of human rights.

The European leaders said their goal was not to abolish capitalism nor finance but to back what Sarkozy called the “return of the state” as a regulator, intervening to support enterprise and limit speculation.

Washington has been less keen to increase market regulation but its allies hope that incoming President Barack Obama will be more amenable to change than his predecessor.

“I hope that these new rules will take shape from the month of April,” Merkel said, “and that the actors on the financial markets will not this time try to stop the politicians putting this regulation into practice.”

New data on Thursday showing a collapse in German exports and fast shrinking manufacturing activity also increased pressure on Berlin to finalise a rescue plan for the country’s ailing economy.

Merkel’s right-left “grand coalition” is poised to hold a crunch meeting next Monday to hammer out a political agreement on a new stimulus package worth some €50 billion ($70 billion) over two years.

This follows a first raft of measures worth over €30 billion ($40 billion) agreed last November that was widely derided as being too puny.

Berlin has been widely criticised for acting too slowly and too cautiously to counteract the financial crisis, with Merkel dubbed “Madame Non” in some European quarters.

A senior official from Merkel’s Christian Democrats revealed Wednesday that the government is also set to put in place guarantees worth €100 billion ($140 billion) to help businesses unable to get funding from banks.

The need to find a solution to the crisis is becoming increasingly urgent as indications grow that Europe’s economic powerhouse is slipping fast into its worst post-war recession.

German exports plunged in November at their fastest rate since 1990, falling 10.6 percent from the previous month, the statistics office Destatis said in a statement on Thursday.

Compared to November last year, the figures were equally bad: exports from Germany – which prides itself on being the world’s biggest exporter – plunged 11.8 percent to €77.1 billion ($96.2 billion).

The recession is now also taking its toll on German jobs. Unemployment rose for the first time in 33 months in December, with more than three million people out of work, figures showed on Wednesday.