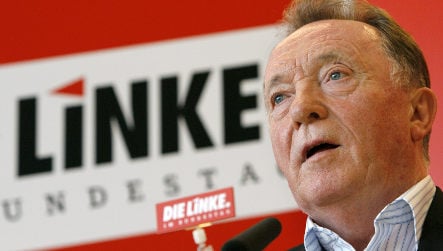 The 72-year-old, who has already made sharp attacks on Deutsche Bank CEO Josef Ackermann, is now lashing out at the press.

“They just want to wind me up, pinch me and pick on me,” he told Stern in an interview.

Though Sodann said he expected to provoke the “friends of capitalism” with his candidacy, he said he is still surprised about what he calls “malice in the media.”

“The next step would only be to shoot me,” he said.

Sodann, who played a police commissioner on the popular TV series Tatort, claims he doesn’t know why the media gets hung up on his comments.

“What do I do? I point out that there are too many poor people in this country and call for more justice,” he told the magazine. “The anger against me partially comes from the fact that I express in simple words what is on the minds of so many in this country.”

Kommissar Sodann said he will be happy when the presidential election is over on May 23.

His chances to become the next German President are looking grim, meanwhile Horst Köhler, a member of Chancellor Merkel’s conservative Christian Democrats, is likely to be re-elected by a thin majority.