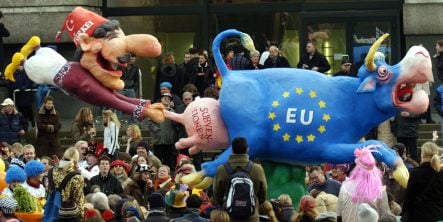 “The idea is that we’d like to celebrate too, but want it all to fit into our lifestyle a bit more,” TKVD spokesperson Katharina Starke said at a press conference.

Many foreigners tend to leave the carnival stronghold Cologne this time of year to avoid the crazy crowds of party revellers, but TKVD wants a piece of the annual madness despite the fact that Cologne’s Kölsch beer and kisses don’t really mix with Muslim beliefs.

“It is not a matter of separating the genders, but we want it to be a bit more civilised,” Starke said.

Regardless of the fact that carnival is actually a Christian celebration, the TKVD thinks they will fit in.

“Right now in Cologne it’s a overall cultural phenomenon,” she said, adding that the club plans to take part in the famous Rosenmontags procession that, with its colourful parades, is one of Karneval highlights.

Each year Karneval opens on the eleventh day of the eleventh month at 11:11 am – but only for one day. Then the festival, based in Catholic traditions, is suspended through Advent and Christmas until the New Year when the Jecken, or jesters, hit the streets for several days of alcohol-fuelled celebration beginning on the Thursday before Lent.

This year’s festival motto is “Unser Fastelovend himmlisch jeck,” or “Our festival of heavenly jest,” in Cologne dialect.