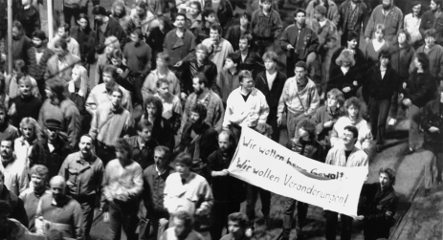 A photo from protests Leipzig in 1989. Photo: DPA

“Leipzig and its Monday demonstrations deserve a place of honour in the history for German freedom,” he told news agency DPA. “That’s why I’d welcome a memorial to unity in Leipzig as a place of lasting remembrance.”

With the 20th anniversary of the fall of the Berlin Wall approaching in the autumn of 2009, there are presently only plans for a reunification memorial in the German capital. But Steinmeier late last year called the peaceful demonstration of 70,000 people in Leipzig on October 9, 1989 as a key turning point that would eventually lead to the opening of the Iron Curtain in November of that year.

The German parliament the Bundestag has asked Culture Minister Bernd Neumann to explore the possibility of complementing a memorial in Berlin with one in Leipzig, as part of the €15 billion project. Neumann is expected to meet soon with local officials to determine the feasibilty of building a second monument to German reunification in the Saxon city.