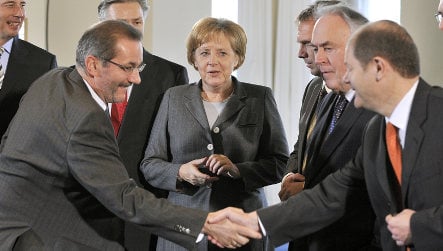 The concert comes on the same day as what is promising to be a heated government meeting to discuss spending measures aimed at averting the worst recession to hit Germany since World War II.

Europe’s largest economy has in recent years shed its “sick man of Europe” mantle and remains the world’s biggest exporter despite China’s rapid catch-up. But with global economic conditions cooling sharply, demand for German goods like fancy cars, machine tools and chemicals has fallen off a cliff.

The credit crunch is biting hard in Germany, with hard-up banks still extremely wary about lending firms cash, and the rising euro is making German exports more expensive. In November, Merkel’s government followed other countries in throwing billions at the economy to jolt it into life with state-backed loans to firms and infrastructure projects like new roads or renovating schools.

The medicine she administered has been widely criticised as too puny, and pressure has grown – from economists, politicians of all colours, firms and even other countries – to give Germany a bigger shot in the arm. Merkel says the first package was worth over €30 billion but critics accuse her exaggerating and say the package represents only €12 billion of actual new spending.

She appears to have got the message. On Monday, the ruling coalition, made up of Merkel’s CDU/CSU conservatives and the centre-left Social Democrats, are to chew over what else might be done.

But the current political landscape in Germany provides the perfect recipe for squabbling, and there appears to be a real risk that all that comes out of Monday’s meeting, and another one on January 12, will be a bitter argument.

The CDU’s sister party, the Bavaria-based Christian Social Union, is still unwilling to compromise on its proposed speedy tax cuts, while the SPD is insisting that social investments must come first.

The CSU is threatening to block any stimulus proposals it doesn’t like the look of. “My proposal of cutting income taxes combines what is necessary in the short term with what make sense in the long term,” Economy Minister Michael Glos, of the CSU, told the Frankfurter Allgemeine daily on Friday.

The governing coalition is now wearily entering the fourth year of a rocky marriage, and both parties are looking ahead to elections in September when they hope to divorce the other and govern with another party at their side. The SPD’s vice-chairman Andrea Nahles told Sunday newspaper Bild am Sonntag, “The grand coalition is no more than an emergency partnership. That’s why we need to give voters clear alternatives in the election campaign.”

Agreeing on anything since 2005 has meant both sides giving ground, and the various looming elections – Germans also vote in European and state-level polls in 2009 – make a compromise on a second stimulus package even harder.

The CSU’s insistence on tax cuts was echoed in a joint call ahead of Monday’s meeting from Germany’s main industry lobby groups, urging the government to cut taxes for firms, as well as non-tax wage deductions like pension contributions.

So far tax cuts have been dismissed by the government, with Finance Minister Peer Steinbrück, of the SPD, swatting such demands away and attacking Britain, with its “crass Keynesianism”, for going down this path.

But in her New Year’s address this week, Merkel hinted that the taxman may start taking less of a cut from people’s pay packets, provided this did not add to Germany’s national debt for future generations to pay off.

Such a move is far from certain, however. Economic experts say the recent fall in energy prices is already cutting consumers some slack and the way forward should be more infrastructure projects.

“We are taking the time on Monday and the following week to look at all the proposals and see to what extent they make sense,” government spokesman Thomas Steg said on Friday. “All the options are still on the table, but after Monday you can expect there to be fewer,” he said.