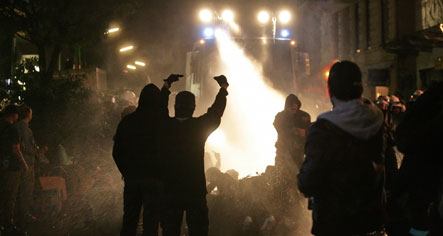 Another riot in the Schanzenviertel last autumn. Photo: DPA

Police in both Hamburg and Leipzig were attacked with firecrackers, stones, and bottles on Wednesday night as they confronted leftist youths.

Sixty-four people were arrested in Leipzig after 150 youths from an alternative district battled police.

In Hamburg, members of the city’s anarchist scene also attacked police officers in the Schanze district after a protest got out of hand. There were also skirmishes in St. Pauli and three officers suffered light injuries.

Police also had to deal with smaller disturbances in both Frankfurt am Main and Augsburg.

But Germany’s largest New Year’s Eve party – celebrations attracting a million people to Berlin’s Brandenburg Gate – remained a good-natured affair. Police had little to do the entire evening and there were no arrests.