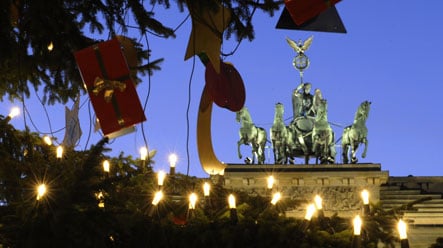 It’s been a busy holiday season for our first Advent in Germany. We’ve delved into the peculiarities of Teutonic traditions and served up plenty of Christmas cooking.

Just in case you’ve missed anything we’ve cobbled it all together for you here. Merry Christmas!

In the latest dispatch of Portnoy’s Stammtisch, The Local’s column about life in Germany, Portnoy contemplates the extended frenzy he faces each holiday season.

Invited to a German Christmas dinner and don’t know what to expect? Forget about your Turkey with cranberry sauce, say good bye to mince pies and Christmas pudding and embrace these Teutonic holiday specialities.

Still not sure what to cook for Christmas? Try some of these German recipes collected by Deutsch Perfekt magazine.

Christmas markets are popular to visit, but have you ever thought about starting your own stand? Stuart Anderson looks into the realities of this famous German tradition from the other side of the counter.

The Local’s guide to Christmas markets

Put on your mittens, don your cap, and join The Local for a tour of Germany’s best-loved Christmas markets.

Goat-headed, troll-like monsters that come out at night and roam Christmas markets and villages are part of southern German tradition during the holidays.

Each December 6, German children celebrate Nikolaus. Why does the Santa look-alike come so early and why do all the children place their shoes outside their front doors on the evening before? The Local has The Lowdown.

Each year Berlin’s top Santa Claus provider Heinzelmännchen holds a veritable Christmas boot camp for hundreds of Santas, and The Local’s Kerstin von Glowacki stopped by to find out what it takes to be a member of the elite yuletide force.

As 2008 slowly winds down, it’s time for The Local’s first annual Christmas quiz.