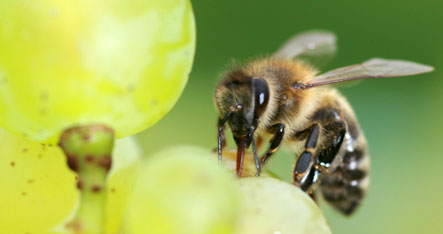 Publishing the results of an experiment in the periodical Current Biology this week, Professor Jürgen Tautz and a team from the University in Würzburg showed fear can be an effective deterrent to some caterpillars. The scientists constructed two gardens and equipped them both with an equal amount of caterpillars, while only one garden had a flock of bees buzz over the heads of the moth and butterfly larvae.

“The damage to the leaves was reduced by 70 percent,” Tautz said, explaining that the constant flight of the bees stressed the caterpillars enough to spoil their appetite.

The bodies of caterpillars are covered with fine sensorial hairs that enable them to perceive the wing flap of potential enemies in advance.

When the hungry little crawlers mistake the harmless honeybees for predatory wasps, they either freeze as soon as they sense the hum of one flying nearby or even drop off the leaves to escape, according to Tautz.

Now the scientist are trying to find out if the pesticide-free plant protection would work on a bigger scale as well. The flying caterpillar control will be used in a big field with flowers and vegetables in alternating rows during the next level of experiments.

“It will be interesting to see if fewer vegetables will get destroyed,” Tautz said, adding that he hoped bees could be an easy alternative to pesticide.