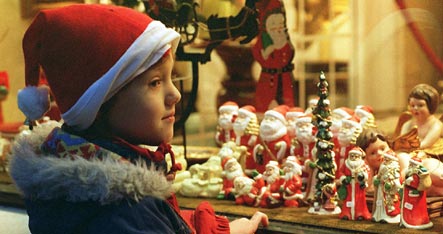 Thank heavens they celebrate the birth of Jesus on December 24 in Germany – I can’t take much more of this.

As an expat American living in Germany, the month of Advent calendars and Nikolaus already drags but as an American expat living in Germany with small children, I’ve been enduring little bouncy beasts at home not unlike kangaroos on meth since mid-October.

I realise this is half my doing by creating a bicultural family, but every year at my house, the kids start tweaking as they pick out their costumes for Halloween and then get all cranked up for Thanksgiving.

Then, after a dinner of turkey casserole in late November, the hyper-marsupials have trouble sleeping because they can’t wait to see their Advent calendar the next day. Their Advent calendar. I forget about this month-long torture every year until bedtime on November 30 – when my Teutonic wife reminds me.

“You wanna help?” she’ll say. The question mark is only for grammar’s sake since it’s clear this aren’t-we-swell-parents project requires two people, especially at 11 pm.

Most German moms insist on hand-made Advent calendars. No cutesy chocolates hidden behind flimsy cardboard doors. Oh no. The calendar has to be 24 individually wrapped packages, usually of two or three items, strung together and dangling somewhere conspicuous – ostensibly so the kids can admire it but really so that other German mothers can inspect it and, if it’s done well enough, take notes. The contents, of course, come from Playmobil or Lego, which know enough about German mothers to kindly make several different Advent calendars each year.

“Hon,” I always say. “They have enough plastic crap already. Do you know what that plastic manger is going to feel like under my bare foot at two in the morning as I stumble for a pee? Or how often you’re going to have to search for exactly that two-wide piece of pink lego?”

“Are you kidding? Look at these kittens and foxes and camels! They’ll love these,” she’ll respond. “And fairies! What kid doesn’t want fairies in their Advent calendar?”

The last question is never answered and is merely followed by a look inquiring if I’ve been hitting the Glühwein a little too much. But I still think to myself: “Aren’t the kittens and foxes and fairies from last year enough?”

But the Advent season juggernaut is only getting started at this point. Simply gaining momentum as it hurtles toward Christmas.

My body also seems to have the same self-preservation instinct each holiday season – meaning I always get sick so I can have some phlegmy respite from all the Advent craziness.

So I think you’ll understand if the red satin on my Santa suit starts turning a slight Grinch-green by this time of year. I’ve had enough. Hang on, there’s someone at the door.

It was the postman bringing a last minute package from abroad. I braced for his usual Christmas greeting but instead he wished me a “Guten Rutsch,” words I’ve always found soothing – “Have a good slide into the New Year.”

I know the phrase supposedly comes from Yiddish for “Happy New Year,” but the sliding connotation is what I grab onto each holiday season. Perhaps it’s just because I know upon hearing it I can slide along for another nine months until we have to start picking out Halloween costumes again.