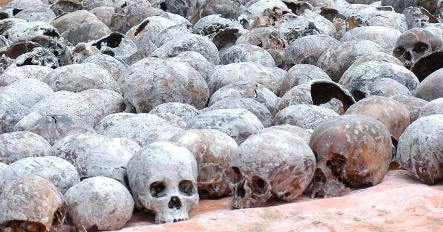 Onesphore Rwabukombe, a 51-year-old ethnic Hutu, was taken into custody Monday on the basis of an arrest warrant issued by a federal judge on December 18, the prosecutor’s office in the southwestern German city of Karlsruhe said.

German authorities suspect Rwabukombe of taking part as mayor of the northern town of Muvumba in killings and “genocidal acts” against ethnic Tutsis.

“He is believed, based on investigations to date, to have instigated, led and coordinated the murder of members of the Tutsi minority,” the office said in a statement. “In particular, he is thought to have taken part in a massacre in Nyarubuye in mid-April 1994 in which several thousand people are believed to have been killed.”

Rwabukombe’s arrest follows months of legal limbo revolving around which authorities have legal jurisdiction in the case.

The Rwanda government accuses him of involvement in the systematic killing campaign in 1994 which left 800,000 dead, most of them Tutsis. He was already held in Germany from July to November, when a court in the western city of Frankfurt ordered his release based on a ruling of the International Criminal Tribunal for Rwanda against similar extradition cases.

But on December 18, the federal prosecutor’s office sought a new arrest warrant saying it was privy to information that the lower court had not seen based on an investigation it had been conducting since March. It declined to provide details or a suspected motive.

German authorities arrested another Rwandan official, Rose Kabuye, in Frankfurt in November, sparking diplomatic tensions with Kigali. Kabuye, President Paul Kagame’s chief of protocol, was held under a warrant issued by a French anti-terrorism judge over her suspected involvement in the 1994 plane crash that killed then president Juvenal Habyarimana. His death was widely seen as the spark that set off the genocide.

Kabuye was later transferred to France, where she was charged with “complicity in murder in relation to terrorism” and freed on bail, on condition she remain on French soil.

Her arrest has drawn furious reactions from Kagame’s Tutsi regime, which accuses Paris and its allies of deploying more efforts to persecute the genocide’s survivors than to hunt its Hutu perpetrators.

Plaintiffs in the case expressed outrage Tuesday when Kabuye was allowed to fly home for Christmas.