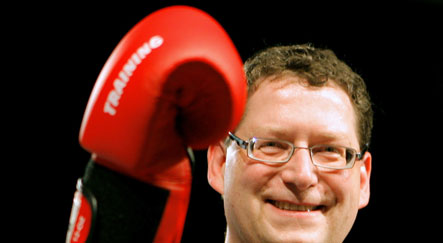 A TSG uppercut for the upper class? Photo: DPA

Schäfer-Gümbel suggested all Germans with assets including real estate over €750,000 should be obligated to loan the government two percent of their wealth for the next 15 years at the low interest rate of 2.5 percent.

“A forced state loan would be a quick and effective instrument to mobilise extra money to tackle the economic crisis,” he told the daily paper Bild.

Schäfer-Gümbel said the government could use the money to finance state investment that would in turn help bolster the economy.

“It would be extremely fair because only those owning great wealth would be pulled in,” he told the paper.

Schäfer-Gümbel faces an uphill climb to convince voters in Hesse that he should become their next premier following his party’s failed attempt to build a left-wing minority government last autumn. He became the Social Democratic (SPD) point man in the state only after Andrea Ypsilanti broke her campaign promise that she would not try to work with the hard-line socialist Left party after last January’s election in Hesse.

It now appears likely that incumbent Roland Koch, head of the conservative Christian Democrats in the state, will likely win the vote next month despite being punished at the polls last time for running a divisive campaign.