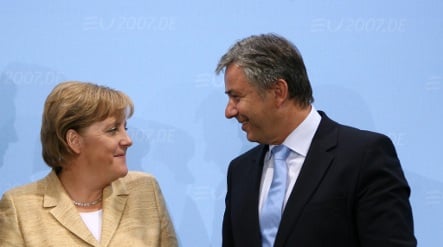 His response was one voice in a growing chorus of criticism to an interview she gave to Cicero magazine this week, in which she declared that it was western Germany’s turn to get extra infrastructure funding after years of pouring cash into the ailing economy of the formerly communist East.

“That’s pretty much the stupidest thing I’ve heard recently,” Wowereit told N24 on Thursday, adding that economic boosts “can only be made for the whole of Germany, and not regionally.”

Wowereit’s irritation comes despite Merkel’s attempts to clarify that her statements were not about promoting the western states, but to end the “relative advantage” of the East. Since reunification, western states have had to pay a “solidarity tax” to help boost the impoverished economy of the former German Democratic Republic.

It has proved difficult for some western states to make their payments, with cities in the Ruhr region having to borrow money to keep up. State premier Jürgen Rüttgers of North-Rhine Westphalia said yesterday that the greatest infrastructural need was currently in the West, Berlin daily Der Tagesspiegel reported on Friday.

The federal government and Germany’s states have now agreed in principle to an economic boost in all regions that will start in January.