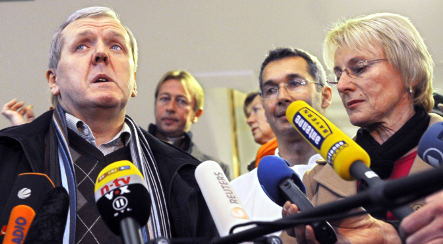 “We can’t let ourselved be afraid of these right-wing extremists,” he said in a short statement to press where he thanked the public for its support, adding that the attempt on his life was “cowardly.”

Meanwhile, Chancellor Angela Merkel made a statement for the first time about the stabbing. “When an official of our state or other people are attacked by right-wing extremists, then the attack is on us all,” she told daily Passauer Neue Presse on Friday, adding that the threat needs to be taken seriously everywhere, not just in Passau.

Mannichl answered his front door on Saturday to a tall skinhead at around 5:30 pm. The man said something along the lines of, “Greetings from the national resistance,” and said, “You leftist pig cop, you won’t trample on the graves of our comrades any more,” before stabbing Mannichl in the stomach with a 12-centimetre knife.

He then threw the knife away in the garden and ran to a waiting car in a nearby street and was driven away. The 52-year-old police chief was seriously wounded in the attack and is now recovering from the attack.

Police this week picked up a 33-year-old man and 22-year-old woman who are suspected of helping the attacker.

Police also released a new description of the suspect, whom they believe to be part of the Bavarian neo-Nazi scene. The man is thought to be between 25 and 35 years old, approximately 1.90 metres tall, and speaks with a Bavarian accent that could possibly have an Austrian lilt.

An email exchange received by Spiegel Online on Friday suggested that the NPD has had Mannichl in its sights for over a year. According to the magazine’s exclusive report, a Passau NPD member wrote to party headquarters for advice in dealing with Mannichl.

The reply, sent on May 16, 2007 by Frank Schwerdt, a right-hand man of NPD leader Udo Voigt, said, “If anything meaningful is to be done against your beloved police chief Mannichl, it should be very carefully prepared and executed.”

Schwerdt claimed Friday that he had been referring to the collection of facts for a possible legal case against Mannichl.