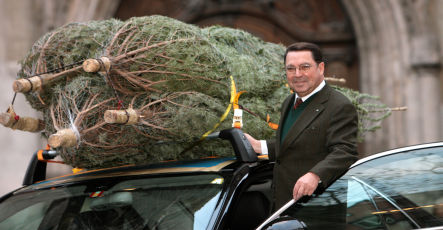 Even the Pope gets sentimental during the Christmas holiday and is desperate for a traditional celebration with the colors of Bavaria’s white and blue flag, Thaddäus Kühnel, dubbed by DPA as the “pope’s courier,” told the news agency. He set off for the Vatican on Thursday with a boot full of German biscuits and five Christmas trees strapped to the roof of his car. “One of the trees is for the Pope’s living room, two are for private chapels,” Kühnel said before his departure.

The 62-year-old aims to arrive in Rome on Friday evening to present his holiness with the special gifts from the pope’s hometown, the little village of Marktl on the Inn river. He will also bear a gift from Georg Ratzinger, the Pope’s brother. Georg usually gives his brother practical things like watches. In return, the Pope presents him with equally useful gifts such as an electronic foot warmer, Kühnel said.

Distant relatives and housekeepers from Bavarian abbeys that the Pope knows from his time as the archbishop of Munich have given Kühnel personal presents to take with him to Rome.

After the gift presentation, Pope Benedict XVI has invited trained bank manager Kühnel for a good long Ratsch, the Bavarian word for “schmooze.”

When Joseph Ratzinger left Bavaria to become cardinal of the Roman Curia, Kühnel promised to be his driver during home visits in the German south. Since then, the banker drives to Rome at least three times a year to bring the Pope gifts from the state.

He has already spent some 250,000 kilometres behind the steering wheel of his official car – the equivalent of driving around the world six times for the his holiness.