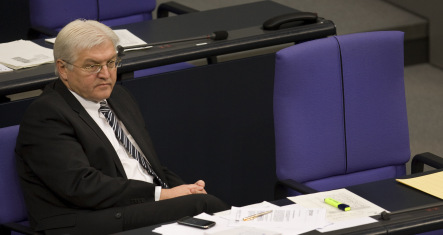 Speaking before a parliamentary investigative committee in Berlin on Thursday, Steinmeier disputed statements by top US military figures this week which indicated that Germany had provided intelligence to the Americans during the invasion.

Parliamentarians want to know if the BND passed on strategic information to the US after former American general James Marks thanked the BND for its help in an interview with Der Spiegel magazine last week, saying the information was instrumental in planning a number of attacks, including the initial invasion. Then on Wednesday, US General Tommy Franks added his praise for German intelligence during the war.

But Steinmeier, chief of staff and head of the BND for the Schröder government at the time, which had been re-elected on an anti-Iraq war platform, called the general’s statements “poisonous praise,” and accusations from opposition parties “ludicrous,” as he spoke before the committee.

As the Social Democrats’ (SPD) candidate for chancellor against conservative Christian Democrat Angela Merkel in next year’s election, such allegations could seriously damage his party’s campaign. If the committee’s questions were a kind of “preparation for the campaign,” they chose the “wrong place,” Steinmeier said.

The decision not to engage in the US war was “one of the most important foreign policy decisions in the last decade,” he said.

General Marks’ must have been referring to “old accounts,” Steinmeier said, adding that it was a “ludicrous idea” that BND agents could have influenced the most modern military machine in the world. German operatives were only in Iraq to gain a perspective on the situation there and were instructed not to engage in military operations, Steinmeier said.

Meanwhile Joschka Fischer, foreign minister at the time of the invasion, also rejected the allegations, saying that the government at the time had a “very great interest in having independent information,” which is why they sent the BND to Baghdad. Fischer is a member of the Green party, which formed a coalition with Social Democrat Gerhard Schröder’s government.